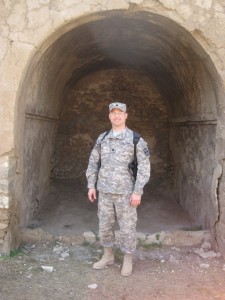 Dr. Lehman while on Active Duty

Not many patients know that before joining NYP/The Allen Hospital as a well-known spine surgeon, Dr. Ronald Lehman served on Active Duty in the Army for 17 years as a Lieutenant Colonel (LTC). Dr. Lehman was at the forefront of caring for our nation’s heroes who were injured during the wars in Iraq and Afghanistan.

“To this day, it is the single most rewarding experience of my life. The sacrifices made by our men and women of the armed forces is nothing short of amazing,” he says.

With a family background in service — both of his grandfathers served in WWII, and his father was a Pennsylvania State Policeman — Dr. Lehman entered West Point in June 1989, then applied for medical school. It was a coveted honor as West Point only allowed two percent of the graduating class to attend medical school.

“Having a military family had some influence on going to West Point, but it was my Senior Army Instructor in High School JROTC (LTC Peter Doak) who most influenced my decision.”

Dr. Lehman completed his residency training at Walter Reed Army Medical Center in Washington, D.C. Prior to that, Dr. Lehman worked at the Pentagon from 1998–2000 as the General Medical Officer.

“I actually took care of one of the Generals who died in the 9/11 terrorist attacks on the Pentagon,” he remembers. “The plane struck in the section near where I had worked, and my colleagues in the Dilorenzo TRICARE Health Clinic were the first responders during the attack, so it had a significant impact on me.”

Dr. Lehman was deployed to Iraq in 2010 and served as the Chief of Surgery and Consultant for Orthopaedics to the Commander of United States Forces-Iraq (USF-I). He finished his Active Duty on April 30, 2014.

“I am most proud of the amazing individuals that I was able to meet while I was in uniform for over 20 years. I will continue to feel humbled for the rest of my career by the care I was able to provide to our nation’s heroes.”

Dr. Lehman has been the recipient of several Department of Defense research grants, totaling more than $10 million.